I have a complaint: Fall will not happen! Last week Dallas Raines told us that on Sunday we would have a high of 79. This did not happen. It was in the 90′s! Now I’m looking at next week’s weather predictions and I’ll have to push soup off another week. It’s just too hot for soup!

Linking up at Menu Plan Monday.

Apparently every fall I attempt to really get back down to both meal planning and blogging. I looked back at my past “Meal Plan Monday”s and found that I had restarted last year also on the week of Talk Like A Pirate Day. And the last one I did was the week of Halloween last year. Oops. I have Pinterest now, so maybe things will be better?

Linking up at Menu Plan Monday

It can be so hard to plan consistently!

Last month, we got a new grill here. A proper one that works nicely. A little over a week ago I put “turkey burgers” on my dinner schedule for a Friday and planned to grill them and make my own buns. 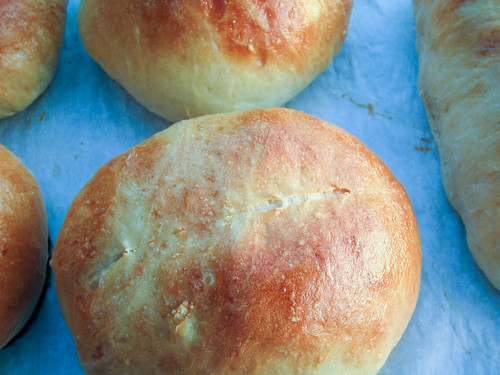 I made the “light brioche buns” from smitten kitchen. They were really good and pretty easy, I didn’t even use my stand mixer for them. I didn’t have any sesame seeds so I just spilt the tops. 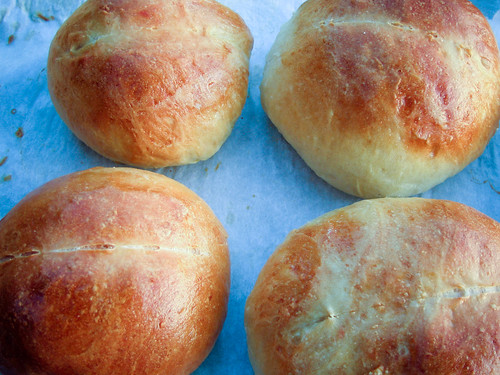 I made turkey burger patties with cheese inside them, and we also grilled the buns. It was really good. 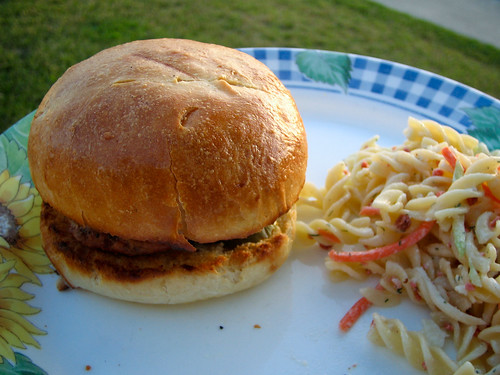 I made the pasta salad for myself for lunch earlier and saved it for a side dish. 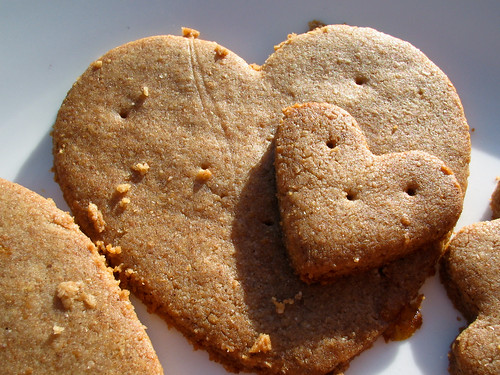 Almost two weeks ago I made these graham crackers.

I used this recipe, adding some extra honey and cinnamon. I rolled the dough out in parchment paper and cut out the shapes on the baking sheet, pulling the scraps away afterward. 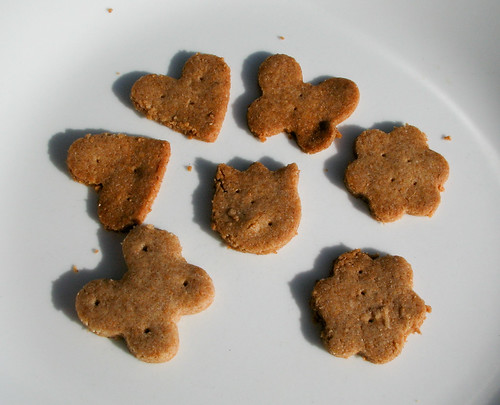 They were no harder than cookies and came out great!

For years, every Mother’s Day my mom would say “I’ll make lasagna.” I would say “No mom, you’re a mom. I’ll make the lasagna.” I’d start to make it, but then partway through I’d get sent to the store or something and she’d end up finishing it. I should mention that we were always at my grandmother’s house, so of course she wanted to do something for her mother too.

This year was probably the most successful ever. I made a big quiche, using the crust recipe from this quiche at smitten kitchen, and the quiche procedure from Alton Brown. I used ham, cheese, broccoli and spinach. The hardest part was how long to bake it! Since it was so big, I wasn’t sure how long it would take, and I debated a bit whether it was done or not. 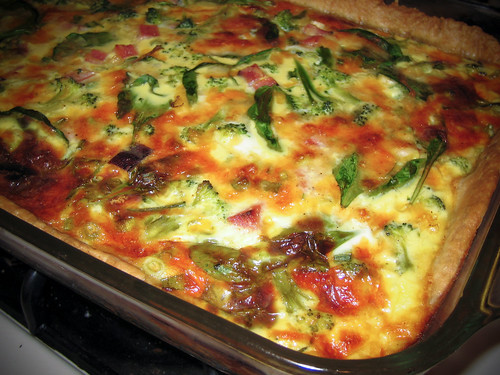 It turned out pretty well. Gramma said it was better than Polly’s and Marie Calendar’s. There’s just something wonderful about grandmothers, isn’t there?

My mom loves croutons, so I put together a salad bar for which I made my own croutons. I’d never made croutons before, but I read lots of crouton recipes and came up with my own version. 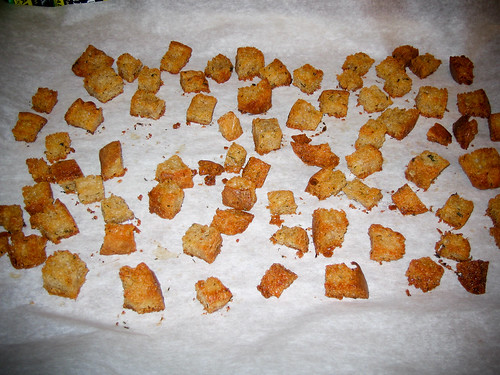 I used the end of a loaf of European Peasant Bread that I made earlier in the week. I cut up my bread and melted some butter in the microwave. I seasoned the butter with garlic salt, pepper, dill, and parsley. I put all the bread cubes in a ziploc bag, poured in the butter mixture and tossed the bread cubes in the bag.

I lined a pan with parchment paper and dumped the bread cubes onto it, separating them so that none were on top of each other. I baked them in the oven at 350°F for about 16 minutes(poking at them every 8 minutes to see if they were crunchy), then turned it up to 375°F for about 10 more minutes. If I make them again I’ll probably try staying at 350°F for like 30 minutes or 375°F the whole time for like 25. I took them out of the oven and let them cool on the counter. They got alot harder as they cooled and became croutony. 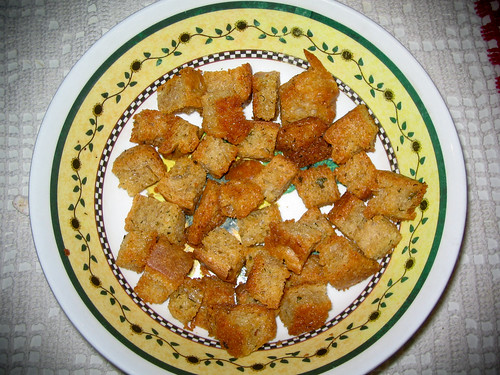 They came out really well. My mom was eating them by themselves, she was like “This is part of my present, right? I get to take the leftovers home in a baggie?” 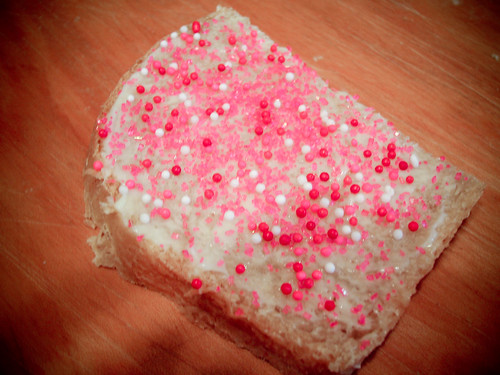 Fairy bread is just buttered bread with sprinkles on top. Ever since I found out about it and started looking at pictures of it on flickr and whatnot, I’ve been thinking about how I would make it. My cousin is turning two next month, and it sounded like a great thing to bring for her party, especially with my fresh baked bread. Yesterday I had to see how it actually tasted, so I cut half a slice of bread, buttered it and put on some pink sugar and valentine colored non-pareils. It was actually pretty good, but I think it would be better with a little different bread. My loaf was the second of a batch of dough, so it had gotten a little sourdough flavor. Now I’m thinking about coloring my bread dough. Is that crazy?

Saturday, April 17 – We made calzones for lunch with olive oil dough. I brushed them with olive oil and sprinkled on garlic salt and parmesan before baking. They turned out huge so we cut them in half. They were really good though.

Sunday, April 18 – Today we had a second late Easter party since so many people couldn’t make it on Easter. I made a batch of rolls, half with light whole wheat dough, half with olive oil dough. I brushed them with butter and baked in muffin tins. 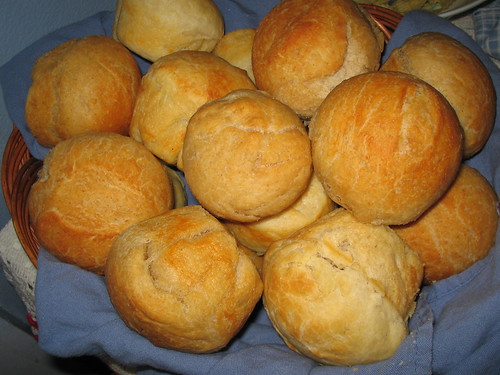 Also, I learned about fairy bread today. Apparently it’s an Australian staple at kids’ parties and it’s just buttered bread with sprinkles on top! It looks so cute and simple. My little cousin is turning two next month and I’m already scheming about making it to bring for her birthday. I was trying to think of different things I could do to make it cool, and then I thought… colored bread! I could tint my bread dough pink or purple. Now I just want to make my next batch of dough pink. Is that crazy?

The book: Artisan Bread in 5 Minutes a Day

I’ve been browsing lots of recipes and food blogs lately, so it only made sense that I document our meal last night. I have to make dinner anyway, right?

A while ago there was a food item on a plate of leftovers from my church MOPS group which I volunteer at that I loved. It was a sort of a hard boiled egg casserole or salad with this cheesy stuff on top and it was just so amazing. I ate it cold, but I couldn’t tell if it was intended to be served hot. Weeks later, there was a day when I couldn’t stop  thinking about it and really wanted it for dinner. Finally, I googled it and found what looked like my dish, Hard-Boiled Egg Casserole. I had to make it right away. I even went to the store and got Half and Half and Gruyere cheese instead of substituting milk and parmesan or something. It was not only wonderful, but exactly what I’d had!

What I found, though, was that I liked the sauce even better on my broccoli than I did on the eggs. So the dinner that I made last night was based on that. I halved the sauce recipe and used that for this dish.

Yesterday, I baked the rest of my Soft American-Style White Bread dough.

I really wanted to try some cinnamon bread with this dough, so I made a mini loaf. Here’s some advice: wax paper is not at all parchment paper and if you are out of parchment paper, do not try to substitute wax paper.

The rolling out and rolling up the cinnamon in the dough didn’t work quite as neatly as I’d hoped, I probably should have rolled it out with more flour. 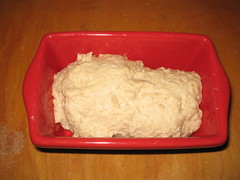 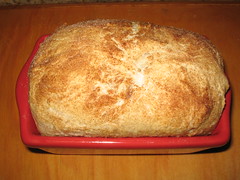 It looked a bit funny when I put it in the pan, but it came out looking nice, and it sure tasted good! I brushed it with butter instead of an egg wash. The instructions said to brush the top with sugar, but I used some of my leftover cinnamon and sugar.

For the rest of the dough, I put it in my usual loaf pan that I use for sandwich bread. I had a revelation the other day about the last loaf and the end of my batch of dough.

There usually isn’t as much dough for the last loaf of bread as for the first. As a result, I often end up with really short loaf of bread or I use the smaller loaf pan and the sandwiches are really tiny.

Finally I thought, “What if I put a ball of aluminum foil in the end of the loaf pan?” Why didn’t I think of that before? It worked pretty well and I ended up with sort of a partial loaf which, when sliced, should be the normal shape and size for sandwich bread. 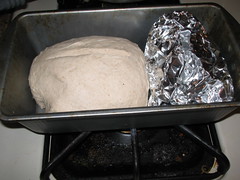 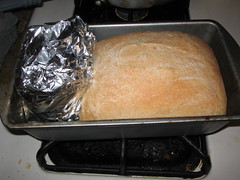 One end looks a little lumpy, but I think it came out pretty nicely. A great bread hack! 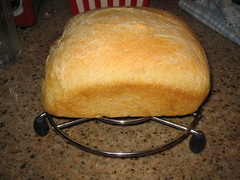 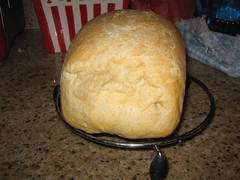 Also this morning Papa was at Henry’s Market and called to see what kind of flour I needed. I suggested looking for King Arthur’s wheat flour. They came back with King Arthur 100% Organic White Whole Wheat Flour. It’s an interesting flour, but I’m not sure if it will taste more like white flour or more like wheat flour, so I’m not sure how I’ll use it yet.